Theme of the second edition of the Australia-Netherlands Water Challenge was AUSTRALIA WATER SMART.

A key area in which Australia and the Netherlands are working together is building a strong information chain for water and climate related problems. This chain consists of data collection, data processing, data storage, data analysis and modelling and the development of smart applications to support decision-making for water managers, policy makers, residents, farmers, business owners, etc.

Several cooperative initiatives are already underway between Australian and Dutch organisations to establish this information chain, building on platforms such as HydroNET (www.hydronet.com) and Delft-FEWS (www.delft-fews.com).

The focus of this second Australia-Netherlands Water Challenge was on two specific dimensions of the information chain:
(1) The potential of social media as a source of data (crowd-sourcing), and;
(2) The potential of apps that enable people to make better informed water-related decisions.

An innovative design platform that facilitates the analysis and mapping of massive volumes of twitter data in near real-time to support emergency response activities during flooding disasters has won the 2nd edition of the Australia-Netherlands Water Challenge.

The solution called "Operational Twitelligence" by a team of students from RMIT and the University of Melbourne was presented at the International Riversymposium in Brisbane on 25 September. The team consisting of Paul Munro, Dan Peade and Damian Meoli competed for the award against three other teams who had emerged as finalists after a 5-month competition that involved students from 9 universities across Australia. The award was presented to the winners by Julie McLellan, CEO of Healthy Waterways and chair of the judging panel.

Says the winning team: "Being part of the Australia-Netherlands Water Challenge has been an illuminating and fun experience. We've had the chance to work with the foremost experts in the industry and were really impressed by the quality of the other finalists. We're looking forward to making the most of the opportunity to take our idea to the next level."

The other ideas competing in the finals included the FloodHealth App by Angela Werner, University of Queensland, the Dairy Pasture Flood Irrigation App by Pieter Raedts, La Trobe University, and the WaterWatch App by Stephanie Borgonia, Emmanuel Diinis and Amanda Siqueira, University of Technology Sydney. All finalists will be given the opportunity to further develop their idea. 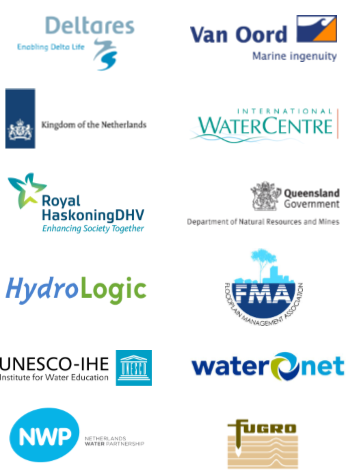