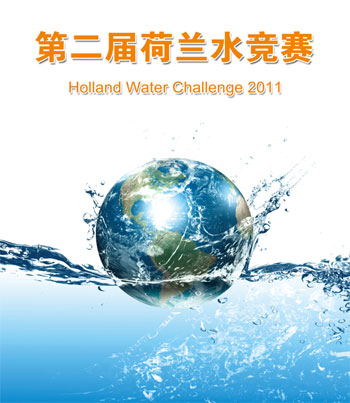 The China-Netherlands Water Challenge 2011 was successfully concluded during a Grand Final in Shanghai on the 31st of May - just ahead of the Aquatech China exhibition.

The event was attended by senior faculty and students from Chinese universities, leading Dutch water technology companies, including Evides, Norit, DHV, BersonUV and Philips, the Embassy of the Netherlands in Beijing, International Water Association, Aquatech, BenCham and the South-Holland Hebei Co-Development Program.

Following a tough competition that started back in February, four students emerged as the top finalists having beaten more than eighty peers from across China. They are: Meng Xianglin (Zhejiang University), Li Jingwen (HIT), Zhao Qian (HIT) and Miao Nan (Tianjin University).

During the Grand Final, each of the finalists got the opportunity to present and argue his/her proposal in front of the expert jury, consisting of Markus Flick (Evides Industriewater), Barry de Haan (Norit), Brian Lue (DHV) and Albert de Haas (Netherlands Embassy).

Ultimately, Ms. Zhao from Harbin Institute of Technology was selected as the overall winner. The jury concluded that "she managed to eloquently and elegantly present an integral solution to the treatment of complex waste waters from the Coal to Chemical industry in China. The concept is innovative, presents a challenging source of further research and has great potential in achieving Zero Liquid Discharge for landlocked chemical operations".

Ms. Zhao was awarded with an internship and a study-trip to the Netherlands. The award was presented by Mr. Albert de Haas, Transport and Water Attaché of the Embassy of the Kingdom of the Netherlands in Beijing.