Taking on the urban water challenges of the 21st century needs vision and leadership, something Singapore and the Netherlands have learnt over many years. The water story of both countries is one driven by long-term and visionary planning. It is thanks to the vision and leadership of unique individuals - politicians, engineers, urban designers, ecologists, etc. - and the collective commitment of national institutions that Singapore and the Netherlands succeeded to embrace their natural environment to the advantage of its people.

It is in this spirit and in recognition of the important role the next generations of water leaders have to play in addressing the 21st century urban water challenges, the Singapore-Netherlands Water Challenge in 2014 challenged students worldwide to develop and express their personal vision and leadership on urban water management.

The Singapore-Netherlands Water Challenge 2014 was officially launched during the Singapore International Water Week by Mr. Khoo Teng Chey, Executive Director of the Singapore Centre for Liveable Cities and Mr. Ahmed Aboutaleb, Major of the the city of Rotterdam. In the presence of more than a hundred guests, they unleashed two giant floating fish in the Netherlands Water Pavilion at the SIWW exhibition hall. To the excitement of the audience, the fish appeared to be represent exactly the rebellious spirit that this year’s challenge was looking to promote as they flew uncontrollably across the exhibition hall! 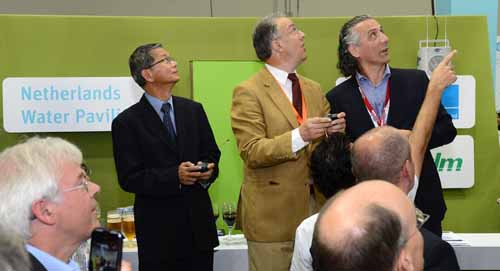 In his speech, Mr. Khoo Teng Chye underlined the importance of international cooperation in addressing global water challenges and the fruitful relationship between the water sectors of Singapore and the Netherlands. As a strong supporter of the Singapore-Netherlands Water Challenge since the very beginning, Mr. Khoo praised the initiative to actively involve young people.

In the last round of the competition, proposals were judged by a team of internationally renowned urban water leaders, chaired by Professor Vladan Babovic of the National University of Singapore (click here for the jury). They announced two winners of the Singapore-Netherlands Sustainability Award: (1) David Gintin, Rayina Rukmina Binol and Tri Handayani from Indonesia for their virtual water campaign "Think Forgotten Water" aimed to create awareness of consumer water usage, and (2) Nishtha Manocha from Singapore who proposed a smart mobile app that leverages mobile technology and social media to collect water consumer data, such as data about water consumption and water quality, that water utility companies can employ to improve their services.

They were presented with their awards by the Dutch Ambassador to Singapore, HE Mr. Jaques Werner, during the Dutch Chamber of Commerce Business Gala in Singapore on 1 April 2015 (photo: the winners with Ambassador Werner). 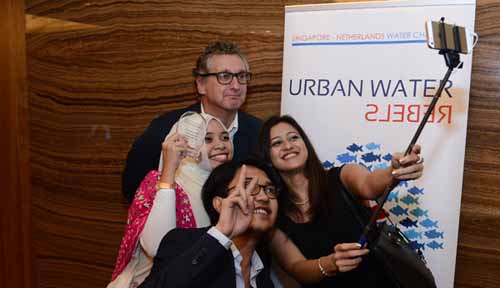 The gala was attended by Minister for Environment and Water Resources Vivian Balakrishnan, former Dutch Minister Professor Dr Pieter Winsemius - whose father was a key economic advisor to Singapore founder Lee Kuan Yew - as well as CEO’s and senior representatives from the Singapore and Dutch business community.

3rd Edition
3rd Edition
Taking on the urban water challenges of the 21st century needs vision and leadership, something Singapore and the Netherlands have learnt over many years. The 3rd Singapore-Netherlands Water Challenge challenged students to develop and express their personal vision and leadership on urban water management in the 21st century.
Read more...